, /PRNewswire/ --  (NYSE: ) announced that (NYSE: LGF.A, LGF.B) highly acclaimed award-winning original musical La La Land, from writer/director and starring and , will receive a special engagement in select ® theatres domestically beginning , 2017.   The film received seven Golden Globes® nominations, more than any other film, including Best Picture, and was also named Best Picture by the . 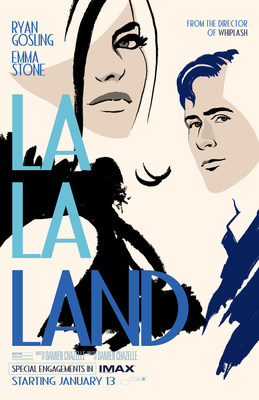 Internationally, the film opened in theatres in in and will continue rolling out in other international territories over the next several months.

"The beautiful presentation of La La Land in took my breath away," said director .  "I cannot wait for audiences to see the work of all the talented crafts-people who helped bring this story to life — the music, sound, production design, costumes, performances — everything explodes in ."

"La La Land is a beautiful and entertaining love letter to old-school made with a clear passion for the movies, and what better way to savor the music and unique visual style of Golden Globes®-nominated La La Land than in the most immersive movie-going experience possible — in ," said , CEO of and Senior Executive Vice President, "We are excited to work again with our friends and partners at Lionsgate, as well as the incredibly talented writer/director in bringing this crowd-pleasing film to audiences around the world."

The ® release of La La Land will be shown in its digitally re-mastered format, which includes the image and sound quality of The IMAX Experience® with proprietary IMAX DMR® (Digital Re-mastering) technology. The crystal-clear images, coupled with customized theatre geometry and powerful digital audio, create a unique environment that will make audiences feel as if they are in the movie.

About La La Land:
La La Land tells the story of Mia (), an aspiring actress, and Sebastian (), a dedicated jazz musician, who are struggling to make ends meet in a city known for crushing hopes and breaking hearts. Set in modern day , this original musical about everyday life explores the joy and pain of pursuing your dreams. The film is written and directed by Academy Award® nominee .

®, IMAX® 3D, IMAX DMR®, Experience It In IMAX®, An IMAX 3D Experience®, The IMAX Experience® and nXos® are trademarks of . More information about the Company can be found at www.imax.com. You may also connect with on (www.facebook.com/imax), Twitter (www.twitter.com/imax) and