With ‘Interstellar,’ Imax Takes Aim at the Bigger Picture
Okt 29, 2014 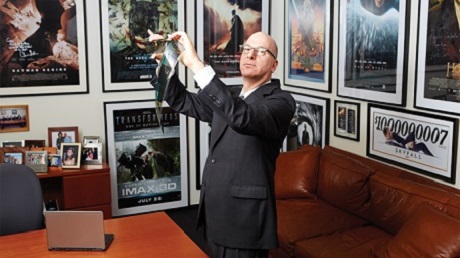 A puzzling quiet blankets Imax’s sprawling Santa Monica complex on a recent October afternoon. Trailers for “Dracula Untold” and “Jupiter Ascending,” screaming, “See it in Imax!” play in a loop, but most of the company’s employees are absent. Stacks of film canisters for Christopher Nolan’s upcoming “Interstellar” line the hallway, outnumbering the executives and technicians on hand.

There’s a reason for this veritable ghost town. The Imax crew is overseeing a Universal CityWalk screening, for theater owners, of Nolan’s space adventure. In their absence, Greg Foster, CEO of Imax Entertainment, and the company’s ambassador to Hollywood, is jittery. He’s desperate to know how the pic played.

Imax didn’t finance “Interstellar.” It didn’t market it. It won’t distribute it. Yet, Foster takes a parental pride in the picture, shot partly with Imax cameras, and debuting nationwide Nov. 5.

The launch of “Interstellar” is also eagerly anticipated by Imax because it allows the company to refocus the industry conversation after it became embroiled in a nasty standoff with the country’s four biggest exhibition chains — AMC, the largest Imax theater operator in the world; Regal; Carmike; and Cinemark. The root of the dispute was Imax’s partnership with Netflix and the Weinstein Co. on a sequel to “Crouching Tiger, Hidden Dragon.” The martial arts follow-up is slated to be released concurrently on Netflix and on Imax screens, but exhibitors are crying foul. They accuse Imax of endangering their business model by mashing together a theatrical release with a home entertainment debut. The decision of these exhibitors, along with Canada’s top circuit, Cineplex, and Europe’s second largest chain, Cineworld, to boycott the film has clearly rattled Imax.

“We thought we were doing something good for the industry,” says Imax Corp. CEO Richard Gelfond. “Netflix is an early disrupter in the field. They’re going to do what they’re going to do. They’re not going to pay attention to the windows. We thought we were making something available for our exhibition partners that otherwise wouldn’t be.” (Imax itself controls only three screens worldwide).

The company has tried to make amends with its exhibitor partners, but nothing will heal wounds like the successful launch of “Interstellar.”

Imax is spending millions on the release, hiring and training 143 projectionists for the movie, providing $30,000 film prints  and taking projectors out of mothballs. The recent digital conversion of multiplexes means that film projection effectively  has been jettisoned, but through force of will, Imax and Nolan, a film devotee, will make sure that prints of “Interstellar” are shown in roughly 50 of its theaters.

“When you see this movie in Imax on 70mm film, you’re looking at a format that is not reproducible in somebody’s living room,” Nolan says. “ ‘Interstellar’ deals with the biggest subject there is — the universe — and we wanted to use the biggest and highest-quality format around. If you want to experience the journey of ‘Interstellar,’ you’ve got to go to one of these theaters.”

Becoming the gold standard for filmmakers like Nolan caps a remarkable turnaround for a company that in 2001 was on the precipice of financial ruin, and threatened with being de-listed by the Toronto Stock Exchange. In those days, Foster used to travel from studio to production office, armed with a PowerPoint presentation detailing how Imax hoped to revolutionize the theatrical experience.

Today, Imax has a $1.9 billion market cap, more than 800 theaters around the world and annual revenue of nearly $300 million. It turns down approximately five movies for every one it shows. Unlike high-end sound systems or 3D projectors, its brand is instantly recognizable to average consumers, and its name carries with it the promise of blockbuster entertainment on a huge scale.

Imax’s success was fueled by Hollywood’s dependence on showy movies such as “The Avengers” and “Transformers,” which offer special effects and pyrotechnics that demand to be seen on the widest of screens. At a time when the business was threatened by the rise of digital diversions, Imax was a panacea.

“Our success is to some extent interdependent with what was happening in the home,” Gelfond says. “There were bigger screens. There was gaming happening, and mobile devices. If audiences were going to leave the couch, they wanted something really special.”

To read more about IMAX in Hollywood visit Variety.