A few weeks ago, we posted about an exciting new art gallery at the IMAX Playa Vista Headquarters called The IMAX Gallery, which features work by some of today’s most exciting poster artists, including the incredibly talented Kevin Tong.

Here exclusively on IMAX.com, Tong — who often works with the uber-popular Austin-based film art gallery Mondo — dishes on topics ranging from the inspiration behind some of his most popular posters to his favorite designs, even which filmmakers are fans of his work. Enjoy!

What’s the process for selecting the films you conceptualize in your work?

Sometimes [Mondo will] approach me with something, like ‘Hey, do you want to do this poster?’ But a lot of the times, like, if I’m watching something and I have a cool idea, I’ll just text one of them and they’ll say ‘I think we can make it happen.’ I think some of my best posters were the ones that I wanted to do and they just happened to have it or went after it for me. Because usually the films that I do posters for are films that I’ve never seen because they’re just coming out. You don’t have as much to work with if you’ve never seen it before.

Where does your inspiration come from?

I guess it just depends. For instance, I did a poster for Pacific Rim. It’s a fantastic movie, but there’s not a whole lot of depth so you kind of just want to show a hero shot, with explosions and monsters because it would be weird to try and take some fine-art approach to that.

Then for Mullholland Drive, it would be weird to make it like this one-sheet with Naomi Watt’s head exploding and cars coming out of it. So I tried to make that one more interpretive of the film’s themes that aren’t so tangible. That’s kind of the two different approaches I have: am I just going to show who’s in the movie and try to make it look sexy and exciting or I am I going to try and make this one something for the fans that raises questions. 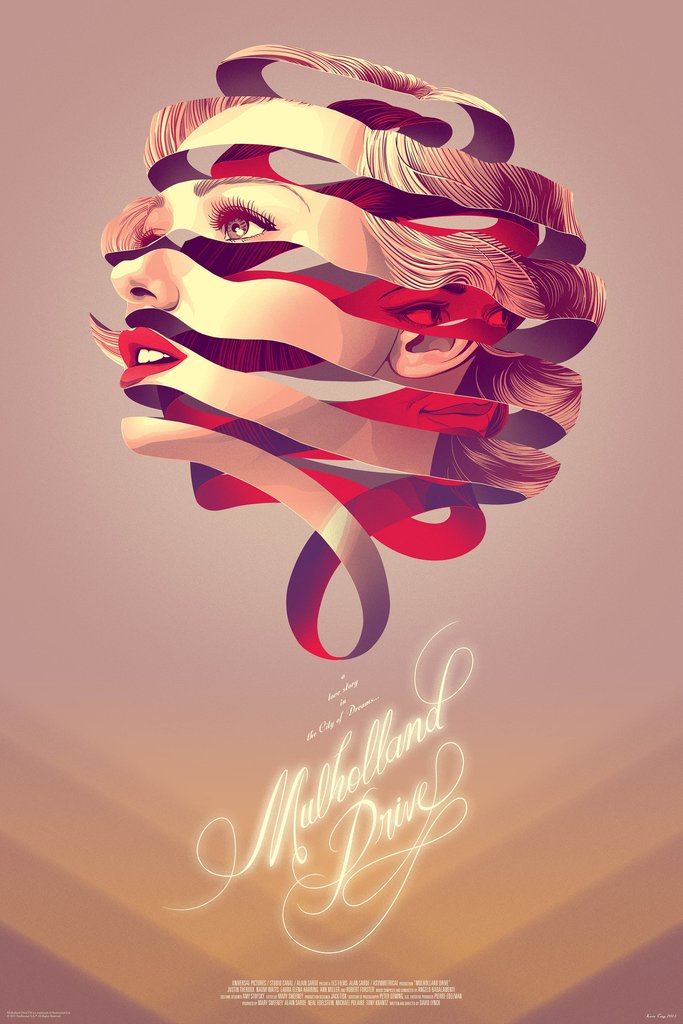 Yeah, the execution of the Mullholland Drive print is really fantastic. Do you have any favorite pieces you’ve done?

To elaborate more on Mullholland Drive, years ago, like six years ago, I was a part of a David Lynch art show in Long Beach … At the time, [the gallery] thought that [I was] this sci-fi guy, so [they thought] let’s give him Dune. It’s a great film, but … dealing with heavy subject matter would be just too heavy for that film in just one poster. So I ended up doing like a popcorn poster for Dune. But it encouraged me to watch all of his films while I was working on it. So I watched Mullholland Drive again and I came up with the idea for the faces unravelling. Years went by and I had that idea fermenting in my head until I found out that Mondo had Mullholland Drive and was like, ‘Guys, I have this idea that I’ve had for five years that I just can’t stop thinking about.’ Then I finally had the chance to let it loose on the world.

I’m glad actually that it took five years because if I had done it when I initially wanted to, I don’t think I would have had the artistic maturity to pull it off quite as much.

Did the idea evolve during that time or did it stay consistent with your original concept?

It was always the face-within-a-face and the strips coming apart, but the old, faded Hollywood vibe was something that I added just to enforce that idea. The lettering and art nouveau background was something that developed over time.

Where did the idea for the Gravity poster come from?

It’s weird. Now, Gravity is this huge film that made hundreds of millions of dollars and won Oscars, but at the time, it was like this indie film that no one knew anything about. When Mondo asked if I wanted to do it, there were all of these other films, for which they were looking for poster artists like Thor: The Dark World, which is this huge Hollywood production. But I read up on Gravity and thought, ‘Holy shit! Children of Men dude is doing a space movie? Sign me up!’ That was all I had to go on. It didn’t look like it was going to make the waves that it did. But when I saw the first trailers for it, I immediately knew this was going to be a film that was going to disorientate the viewer on purpose … So I made it intentionally to have no right-side-up or upside-down, so it’s really up to the owner to frame it however they want. Even the text is laid out that way. That’s how I tried to touch what the movie was all about.

Given the film takes place in space, how did you settle on the particular color palate you used for the poster’s design?

I basically took cues from the film because lighting on Earth is very different from lighting in space. On Earth, sunlight comes down, hits things and bounces all around; whereas, in space, the light either hits you or it doesn’t. You don’t get other colors reflected onto you by other things. In a movie that looks great, but I really wanted to make [the poster] something that people would want to hang in their living room. How can I make it high-contrast but also alive and uplifting? That’s when I came up with the idea of giving it this underwater exploration kind of vibe by bringing up the blues and greens, even though technically, there would be no color in space.

You can’t always be a slave to the technical minutia, especially with art. You can exaggerate things or maybe even make things up — well, not completely, but you know what I mean.

Have you ever been contacted by any of the filmmakers who saw and liked your work?

Mainly just though social media. Actually, the director of Doctor Strange, Scott Derrickson, who I didn’t even know was following me, complemented by Ran poster. So yeah, that happens sometimes. It’s weird.

(Tong admitted that Dan Trachtenberg, the director of 10 Cloverfield Lane, also has reached out as a fan of his work.)

It’s clear that you and your contemporaries are true movie fans. Is it ever your objective to elevate a film or its marketing with your art?

I think anything that Mondo does, and all the artists they work with, is always, in a way, in worship of the film, because these aren’t necessary. They aren’t really being used as one-sheets or as billboards to sell the movie. It’s more about celebrating the movie and providing a very specialized, unique product that hasn’t been mass-produced. That’s not just something you do when you do blast advertising. It’s almost like, ‘Look, I made these 400 prints just for you.’ So yeah, there is this question of how can I elevate this. Because you’re part of something special.