A Beautiful Planet is a breathtaking portrait of Earth from space, providing a unique perspective and increased understanding of our planet and galaxy as never seen before. Made in cooperation with the National Aeronautics and Space Administration (NASA), the film features stunning footage of our magnificent blue planet — and the effects humanity has had on it over time — captured by the astronauts aboard the International Space Station (ISS). From space, Earth blazes at night with the electric intensity of human expansion — a direct visualization of our changing world. But it is within our power to protect the planet. As we continue to explore and gain knowledge of our galaxy, we also develop a deeper connection to the place we all call home. Narrated by Academy Award® winner Jennifer Lawrence and from IMAX Entertainment and Toni Myers — the acclaimed filmmaker behind celebrated IMAX® documentaries Blue Planet, Hubble 3D, and Space Station 3D — A Beautiful Planet presents an awe-inspiring glimpse of Earth and a hopeful look into the future of humanity.

Wonder Woman— which marks the first live-action blockbuster released in IMAX to be directed by a woman, the incredibly talented Patty Jenkins — stars an amazing roster of supremely kick-ass women, led by Gal Gadot as the titular superhero.

The release of Wonder Woman— the first superhero studio tentpole to feature a female protagonist at its center — really is a watershed moment in Hollywood.

Here are some of our favorite, most inspiring wonder women (both fictional and IRL) from past IMAX films:

—     Toni Myers:Kicking off our list is none other than the acclaimed filmmaker Toni Myers, who is a trailblazer not only for IMAX, but within the film industry at large. Myers has had a brilliant career that spans decades having directed some of the most successful IMAX documentaries, including Space Station 3D(2002), Hubble(2010) and last year’s A Beautiful Planet.

Myers commented on her career as a documentarian saying, “The whole idea of making A Beautiful Planetwas [based on] the hope that I could inspire a new generation to appreciate their world through that lens, and if this film can inspire [young people] to go out and work toward a solution and work together and spread the word then that will make me extremely happy.” Read the full Q & A HERE.

—     Scarlett Johannson:One of the world’s most recognizable movie stars, Scarlett Johannson has had an incredible career in IMAX having been featured in eight IMAX releases, including both Captain Americaand Avengersfilms, Iron Man 2, Lucy, The Jungle Bookand Ghost in the Shell. IMAX fans will see Johannson next year in Avengers: Infinity War.

—     Emma Watson:Though she’s only 27, Emma Watson likewise has had an extensive career to date in IMAX starring in a remarkable ten IMAX releases, including all eight Harry Potterfilms (thanks largely to last year’s Harry Pottermarathon in IMAX), Noah(2014) and this year’s blockbuster hit Beauty and the Beast. Fun fact:Scenes from this year’s indie film The Circle, starring Watson and Tom Hanks, were actually filmed at IMAX headquarters in Playa Vista.

—     Jyn Erso (from Disney’s Rogue One):Switching gears a bit, on the fictional side, one of the most empowering female protagonists to have graced an IMAX screen is Jyn Erso, played by Felicity Jones, in Rogue One: A Star Wars Story. A reluctant hero, Erso, who Jones imbues with grace and spunk, represents one of the most pivotal players in the entire Star Warssaga. Let’s face it, Rey(an honorable mention here) wouldn’t have even existed if not for the courage of Erso.

—     Katniss Everdeen (from The Hunger Gamesfranchise):Another landmark heroine from a massively popular movie series in IMAX, Katniss Everdeen in The Hunger Gamesfranchise, kick-started a whole new wave of empowered female protagonists featured in teen fiction adaptations (think the Divergentseries). And for good reason. Katniss, immortalized by the incomparable Jennifer Lawrence, represents the kind of dogged heroine of impeachable character that every person could admire. Fun fact:Lawrence, who narrated A Beautiful Planet, told Peoplemagazine in 2014 that one of her post- Hunger Gamesambitions was to do some voiceover work.

—     Imperator Furiosa (from Mad Max: Fury Road):Lastly, what’s a list of some of the most kick-ass modern women (fictional or otherwise) without the revolutionary character, Imperator Furiosa? Played by Charlize Theron with the sort of steely fury rarely seen on the bigscreen, Furiosa is a heroine for the ages. So much so, one nearly forgets the movie is called Mad Max.

Attention, Earthlings! IMAX has partnered with AMC Theatres to bring you Space Week!

For the remainder of the day, journey through the galaxy in one of our IMAX Space Features. And for those movie lovers who really want to make the most of their Space Week experience, the IMAX Space Pass provides unlimited access to all of the space-filled excitement throughout the week.

See the out-of-this-world schedule below: 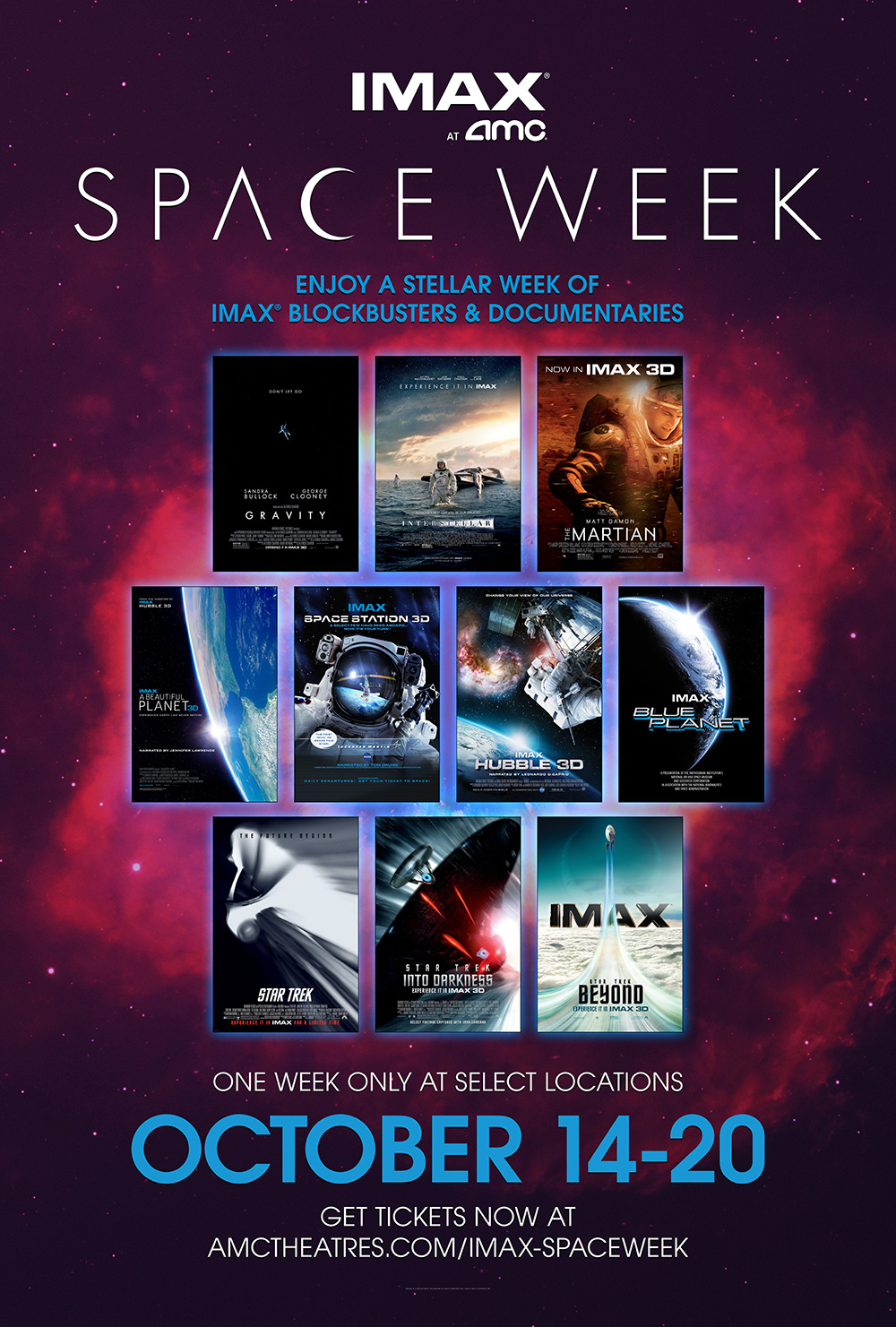 Find a theatre near you below! 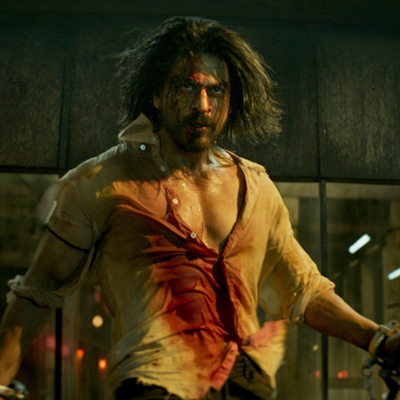 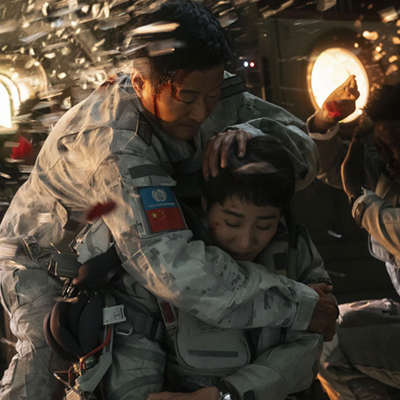 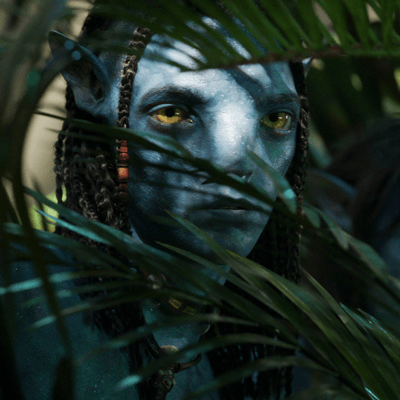 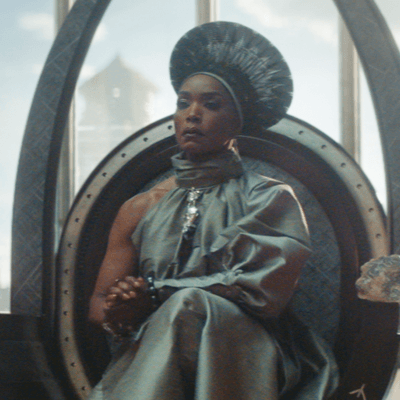