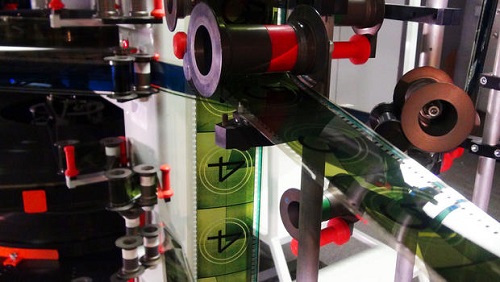 Despite the motion picture industry's nearly complete transition to digital production and exhibition, fans of Christopher Nolan are able to attend screenings of his highly-anticipated futuristic epic, "Interstellar," on a decidedly old-school format: large-format 70mm film.

The nearly three-hour movie, opening wide on Friday, was released two days earlier in a handful of U.S. and international theatres that are exclusively screening 70mm IMAX, standard 70mm and 35mm prints, rather than digital projection.

"We like putting our best foot forward," said Greg Foster, senior exec. V.P., IMAX Corp., and CEO of IMAX Entertainment. "The finest filmmakers in the world have a thing for IMAX, whether it's J.J. Abrams, Jim Cameron, Alfonso Cuaron, and none more than Chris Nolan."

More than an hour of "Interstellar"'s running time was shot with IMAX 70mm cameras. "He's designed the movie with IMAX in mind," said Foster.

Even with the increasing improvement in the quality of digital cameras (seven of the last 15 Academy Award nominees for cinematography were captured digitally), David Keighley, Chief Quality Officer of IMAX, called IMAX film -- with its 12 x 18K resolution and wide dynamic range -- "the gold standard" of image capture.

Keighley said he believes digital's resolution will eclipse film for image capture "in the very near future," but it's not there yet -- and it still can't compare to the organic quality brought about by celluloid's photo-sensitive silver emulsion, whose grain is far finer than the tiniest pixel.

"Chris loves you to see his movies the way he intended: Shot on film and projected on film, so you get all that nuance," Keighley said.

IMAX, which originated with multi-projector and large-format presentations at World Expos in 1967 and '70, grew into a producer of documentaries for planetariums and science museums, with a roster that includes "To Fly," the Oscar-nominated "Eruption of Mount St. Helens," and "The Dream Is Alive" (1985), narrated by CBS News' Walter Cronkite.

"Our business evolved in the late 1990s and early 2000, when we realized that to really expand our audience and bring in a different kind of filmmaker, we had to supplement our documentary moviemaking -- whales, bears, seals and space movies -- with Hollywood," said Foster. "The best way of getting the best movies was forging relationships with the best filmmakers. And that's what we've done."

In 2014, 35 Hollywood releases, including "Lucy, "Transformers: Age of Extinction" and "Captain America: The Winter Soldier," were shot or remastered in IMAX, bringing in three-quarters of a billion dollars at IMAX's 800+ screens.