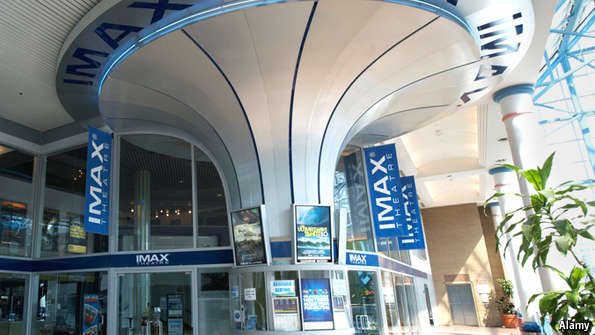 When Richard Gelfond, the boss of IMAX, goes to China, people sometimes ask for his autograph. That is because for the Chinese, watching films on a screen 20 metres high is still a novelty, and IMAX is the best-known brand in giant-screen cinemas. No one in Hollywood has yet asked for Mr Gelfond’s autograph, but he is happier being a star abroad. China is now the world’s second-largest cinema market. Its box-office receipts rose by 37% in 2014, to around $4.8 billion. Along with other emerging economies, it will drive the film industry’s growth in the years ahead.

IMAX’s roots are in museums and science centres, where audiences goggle at documentaries about sharks, dinosaurs and planets. Its fortunes were boosted when, in 2009, its cinemas did 3D screenings of “Avatar”, a film about tree-hugging blue aliens. The film broke worldwide box-office records and introduced IMAX to millions more popcorn-chewers. Now, the company is in “the sweet spot of what is working well globally in the box office”, says James Marsh of Piper Jaffray, an investment bank. The high-budget, high-octane blockbusters that Hollywood spews out these days are ideally suited to IMAX screens; and more than 55% of the company’s 800 screens are outside America, mostly in high-growth markets.

IMAX’s margins are more than double those of cinema chains such as AMC and Regal, because it does not bear the costs of owning theatres or employing ushers. It makes its money by selling or licensing its screens and other technology to cinema operators, and by taking a cut of their box-office receipts. It also makes money from studios by assuming the cost of remastering films so they look slick on its giant screens, in exchange for a slice of what the studios get from ticket sales. So, when films do well, IMAX gets a piece of the action; when they bomb, its costs are limited.

Mr Gelfond may not get mobbed by film fans on Hollywood Boulevard, but his number is in every studio boss’s Rolodex. The studios want their big-budget productions to be shown on the largest possible screens; and negotiations to get them into IMAX cinemas can start a year or more in advance, says Michael Burns of Lionsgate, a big studio. Sometimes producers will delay a film’s release until it can get a good slot. This has happened with “Mission Impossible 5”, whose debut has been postponed from December 2014 to July 2015.

To read more about IMAX's future in the global market visit The Economist.