March 25 is going to be a big day for superhero movie buffs. It’s the opening of Batman v. Superman, the first time those characters have appeared together in a live-action movie. (It will also be the first feature-movie appearances of Wonder Woman and Aquaman.)

You can read about the tech specs of IMAX on Wikipedia, but you know the basics: Filmmakers use a huge camera containing huge spools of film (or huge hard drives, for digital video) to capture video that projects onto reallyhuge screens.

In the old days, you’d see 40-minute IMAX nature movies at science museums. These days, IMAX is a way to get people out of their home theaters and into real theaters to see big-budget blockbuster movies on enormous screens with unbelievable resolution.

To celebrate the opening of Batman v. Superman (and to scratch a few curiosity itches of my own), I recently spoke with Brian Bonnick, the chief technology officer of IMAX, to talk about the technology.

David Pogue: Is IMAX still that gigantic-format film and those gigantic cameras?

But we moved over to digital [in 2008], and that’s gone through multiple iterations. We’re constantly updating the computers powering the systems. They’ve become more and more powerful, which means that we can do more things with it.

Recently, we launched our laser projection system — a ground-up development of a next-generation system utilizing lasers.

Most of the other players out there use laser illumination as a way to improve brightness. That’s great. But we were trying to address three key problems that plague digital projectors: lack of brightness, lack of contrast, and lack of sharpness.

This all tied back to the prism. The light bounces into this prism and bounces off of three chips to create the red, blue, and green pixels. But now you’ve got this stray light hitting each of these chips. That degrades the image contrast quite a bit.

So we threw away the prism. We incorporated what we call a frame design. Instead of having these chips mounted to a chunk of glass, we mounted them to a frame in the right positions. By removing the glass, we got rid of any cross-reflection, so our contrast took a giant jump upwards.

And then, by going with this open frame, we use invar [a nickel-iron alloy], one of the most thermally stable materials on the planet. So while we still have expansion and contraction, all of the components expand and contract at the same rate relative to one another. Combined with changes to the optics of the system and our own custom designed lenses, we are getting unbelievably sharp images on the screen. In my opinion, it now exceeds that of what used to be the world benchmark, which was IMAX 15/70 film.

We use dual projectors. One of the artifacts that all digital projectors have is the “screen-door effect,” which is where you see the little black lines between the pixels. The dual-projector system immediately cuts that down 50%.

DP: Two projectors: Is that for 3D only, or all IMAX?

DP: And is it the kind of thing where the alignment of the pixels is slightly offset between the two projectors, to eliminate the screen-door effect?

BB: It’s a little bit more complicated than that, but that’s essentially accurate.

DP: Where can someone go see the new laser projection system?

BB: Only a few theaters have converted so far — mostly the biggest ones. There’s a list at IMAX.com/laser. [There are six in the U.S., with more coming.]

DP: In feature films with IMAX so far, only some scenes are shot in IMAX. (For example, The Dark Knight included 28 minutes of IMAX footage, cut into a movie that was otherwise shot traditionally. Mission: Impossible —Ghost Protocol had 25 minutes of IMAX.) And in those movies, the aspect ratio of the image jumps back and forth between IMAX segments and non-IMAX. What’s that about?

BB: It’s totally a creative decision by the filmmaker. When they made theHunger Games movie, every time the shot came back to the arena, the filmmaker expanded the aspect ratio to the full IMAX format. It created a different emotional experience, because obviously you’re being enveloped, becoming more involved with the storyline.

DP: But why not shoot the entire movie in IMAX?

BB: First of all, there’s a cost involved. There’s also a creative element, where they’re trying to accentuate a component of the movie, like they did inHunger Games.

Typically, the IMAX cameras really do well when you’re in very wide-open vista shots — because they have such resolution, they can capture the finest of detail — whereas if you’re doing a closeup on somebody’s face, you can get by with something less. So you pick your camera based off of what you’re trying to achieve in the shot.

DP: So the only reason not to shoot the whole movie in IMAX is cost?

BB: There’s no technical reason that you couldn’t do that. The upcomingAvengers: Infinity Wars movies, part 1 and part 2, will be the first full-length feature films ever to be captured entirely with IMAX cameras.

DP: [Note: The nature of pre-digital film cameras has been another factor. As Tested.com put it, “IMAX film cameras are heavy, loud, take a long time to reload film, and have limited mounting options on camera rigs, which is why no Hollywood film so far has been filmed entirely in 70mm IMAX.”] IMAX cameras are now digital. Does that make them smaller and able to go places they couldn’t before?

BB: Yes and no. Our 3D workhorse camera is a bit larger. You couldn’t mount it onto the wing of a plane or something. 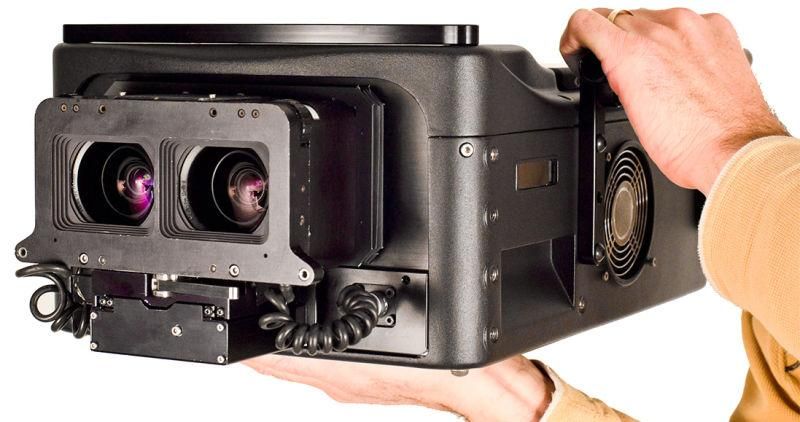 The next generation 2D digital camera, which is based off Arri technology, is certainly more maneuverable. It can be handheld, put on a rig, put on your shoulder. 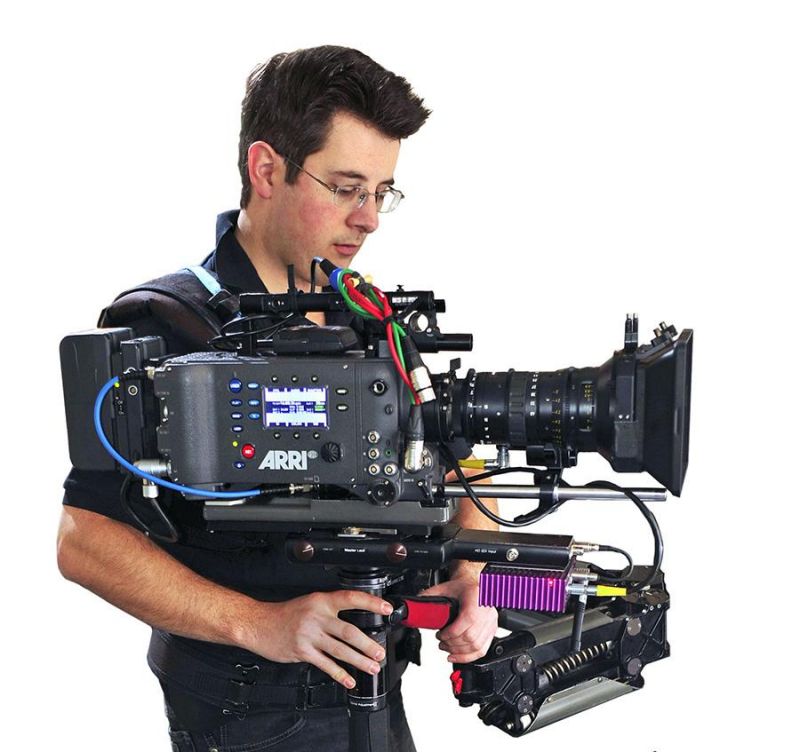 DP: It’s my impression that IMAX is attractive to movie studios as a way to fight back against people retreating to their homes to watch movies. So it strikes me as funny when I see people watching movies that were originally shot for IMAX on, for example, a plane seat back. As the IMAX CTO, does that make you cringe?

BB: Well, when I see my kids using their iPhones to watch IMAX, I don’t get it. It’s absolutely not the way a filmmaker ever intended you to watch his movie. I don’t support that.

Our belief is that IMAX is the out-of-home experience. Of course, people are becoming more demanding, given the fact that home products are getting better. So it’s important for us to crank it up and improve the quality of our presentations and our sound. That’s what I do day in and day out!

DP: There’s some controversy over the fact that the IMAX theaters in many malls aren’t anywhere near as big as true, 70mm IMAX screens. How do you answer the critics?

BB: There is no standard IMAX screen size, because auditorium sizes vary.

When IMAX first started out nearly 50 years ago, it was in purpose-built auditoriums that could accommodate both a larger screen and a larger audience.

As we approached the 2000s, there was a shift in how theaters were being built, with a focus on multiplexes. We knew that if we wanted to grow the IMAX network, we needed a way to design an IMAX experience for these environments.

Our R&D team created a theater design that removes the first few rows of seating and brings the floor-to-ceiling, wall-to-wall, curved screen closer to the audience, to fully maximize their field of view.

When selecting where an IMAX theater is going to go, we look for the largest auditorium at the multiplex. Our design team goes in to determine whether the size and shape will meet our strict requirements. If it does not, we don’t install the system.

We understand that the first thing you often notice when you walk into a theater is screen size (relative to your body height), and that customers may be taken aback at first if they’re used to going to one of our purpose-built theaters.

But there’s more to IMAX than screen size. There are several other elements — special acoustical treatment, all of the custom-built technology, the remastering of the image and sound — that all work together to create an immersive experience. That’s what IMAX is all about: the experience.

Once the lights go off, we are confident that audiences will be drawn into the movie, because the theater was designed to provide the same viewing angles as our largest theaters (with the audience being closer to the screen than they would be in the purpose-built theaters), and that it will be the best possible experience in their area.

DP: How do you engage with filmmakers? Do they approach you, or do you approach them?

BB: Years back, we would go to these meetings with studios — and we’d be sitting at the kids’ table.

Now, we’re in position where we select the films that we want and turn away the ones that we don’t want. The demand to use our cameras is at an all-time high. I don’t think we’ve ever been in this place before.

For every film that we do, we turn down about four or five. That’s partly because we’re sort of a “one film at a time” company, given that IMAX is one screen in a multiplex. And we like to stick to a movie instead of showing different films every weekend. For example, Star Wars opened on December 18, and played for over a month. Obviously, there were other films being released in December and January, but we had to say, “Sorry, our screens are committed to Star Wars.” 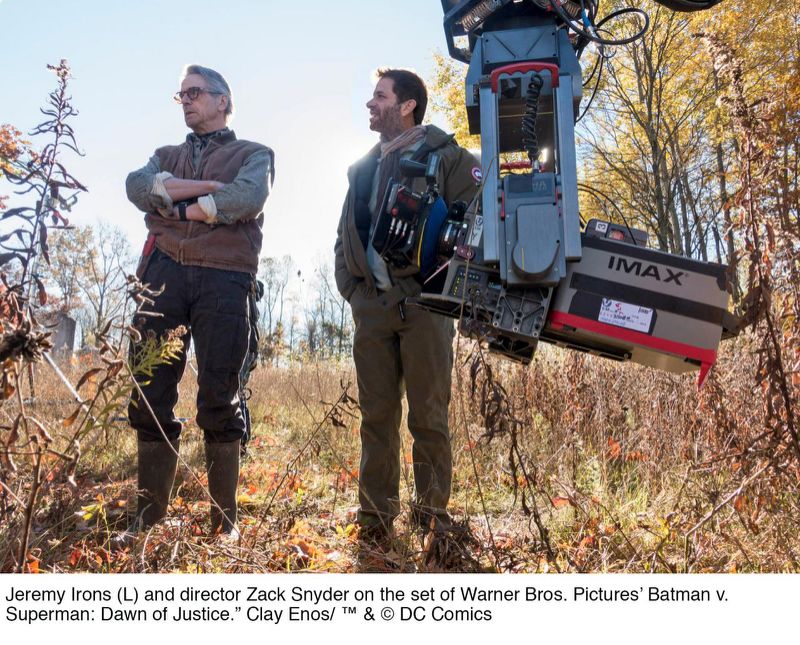 DP: What is the roadmap for the future?

We’re well over 10 years into our DMR technology [Digital Media Remastering, which up-converts standard-resolution movies to IMAX format], and we’re constantly enhancing the quality to make the image more pristine.

In the days of film, our very first set of tools were designed to help reduce the level of grain in film. But when we moved over to digital, you don’t have film grain, but you do have electronic “noise” [random speckles]. So, it’s a different problem to contend with.

In terms of our projectors, our GT laser projector is designed for screens over 80 feet. We’re in the very early design stages of contemplating something smaller than that.

David Pogue is the founder of Yahoo Tech; here’s how to get his columns by email. On the Web, he’s davidpogue.com. On Twitter, he’s @pogue. On email, he’s poguester@yahoo.com. He welcomes nontoxic comments in the Comments below.